The collapse in SunEdison

The collapse in SunEdison (where Einhorn is the biggest holder) seems extremely 'margin-call, liquidation-forced' in style... especially the last 2 days... 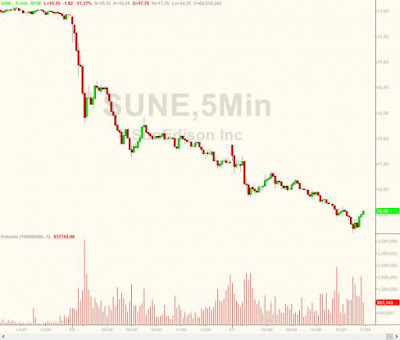 Posted by SARTRE at 10:30 AM No comments: Links to this post

How much welfare Uncle Sam provides companies has long been one of the great mysteries of taxpayer spending. Like a secret underground river, boodles have flowed out of the Treasury and into corporate bank accounts without notice.
Now we finally have a first look at the size of that river and where the cash goes.
The federal government has quietly doled out $68 billion through 137 government giveaway programs since 2000, according to a new database built by a nonprofit research organization, Good Jobs First. It identified more than 164,000 gifts of taxpayer money to companies. You can look up company names, subsidy programs and other freebies at the Subsidy Tracker 3.0 website.
A report the organization released today, “Uncle Sam’s Favorite Corporations,” shows that big businesses raked in two-thirds of the welfare.
The most surprising and tantalizing finding is the identity of the biggest known recipient of federal welfare. That dubious honor belongs to Iberdrola, a Spanish energy company with a reputation for awful service and admissions of incompetence. It collected $2.1 billion of welfare on a $5.4 billion investment in U.S. wind farms from coast to coast.
In fact, 10 of the 50 biggest recipients of federal welfare are foreign-owned firms. Try to imagine Congress debating a bill giving welfare payments to poor Canadians, Mexicans and Europeans and you’ll see the absurdity of U.S. taxpayers providing welfare to the owners of foreign corporations.
Read the entire article
Posted by SARTRE at 6:53 AM No comments: Links to this post